Stand up for Science Rally

Around 500 people gathered on Tuesday 13 December to protest the attacks on science by the coming Administration. 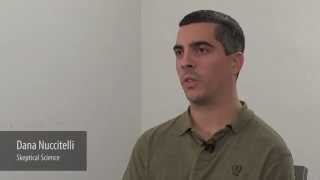 Next: Dana Nuccitelli - Strange Attacks on the 97% Consensus

I’ve lost count of the times of people saying “what’s the harm?” towards me when I tell them that you shouldn’t use alternative medicine. After all, if it doesn’t work it can’t harm you. Right? END_OF_DOCUMENT_TOKEN_TO_BE_REPLACED

Why We Became Scientists: Dunderhead

Working with scientists for over a decade has taught me one thing: they are an interesting and varied bunch. Fiercely dedicated to their chosen career, love what they do, very enthusiastic when given half a chance to talk about their research, and very inquisitive. They perk up when somewhere a scientist says “huh, that’s funny.” After all, this often means there’s something new and exciting that they can dig into. END_OF_DOCUMENT_TOKEN_TO_BE_REPLACED

The past days I’ve been at the AGU Fall Meeting interviewing scientists and experts, going to presentations, visit poster sessions, checking out exhibitions, and meeting a lot of interesting folks. Basically I’m gathering information and content on a lot of climate science and science communication related subjects.

For every day of the Fall Meeting you’ll see an article from me about interesting sessions, exhibits, and other goings-on at the Fall Meeting.  END_OF_DOCUMENT_TOKEN_TO_BE_REPLACED

This is just a quick post for two announcements. The first one is that I’m in San Francisco at the moment and this Friday I’ll be meeting with Jason from Opinion-Ville. Anyone who is interested can join us. Please see below for further details.

The second announcement is that I’ll be attending the AGU Fall Meeting again. Reporting on sessions, posters that caught my eye, exhibitions, and anything else of interest. Basically I’ll be reporting on a lot of climate science and science communication related subjects. Again, further details below. END_OF_DOCUMENT_TOKEN_TO_BE_REPLACED

Social media is both a blessing and the bane of my life. It’s used to great effect to counter (potentially dangerous) misinformation and share fun little tidbits about science. But at the same time it has made it easy to reach millions with wacky conspiracy theories. Some use it very effectively to spread misinformation.

For me social media is a great way to connect with friends and other science communicators. Though that doesn’t shield me from the misinformed or wacky side of the internet (there are a couple of folks who activity seek me out). It doesn’t surprise me that this happens. What does surprise me is when my friends share or like conspiracy theories: END_OF_DOCUMENT_TOKEN_TO_BE_REPLACED

Wearables like activity trackers do get a bit of attention today. They are still a bit gimmicky as the market is still figuring out how people use them and want to use them. But there is a steady uptake in their usage, consumers bought a respectable 78 millions devices last year. I’m even among the folks who quite happily use a fitness tracker to track exercises and keep an eye on their health.

The detail though is that these type of devices haven’t been around for long. Fitbit, probably one of the more known brands, introduced their first activity tracker in 2009. That’s not a lot of time to gather data on how they’re used and how effective they are. Which is a bit of a problem when you’re making health claims about these devices. END_OF_DOCUMENT_TOKEN_TO_BE_REPLACED

Politics isn’t what I usually write about. To me politics and preferred policy options are consequences of how you see the world and the road you want to take. It’s something personal but can be a fun topic to talk about with all the different perspectives.

To me it’s a valid option to say you don’t want to be part of the EU. It also is a valid position to say that you never want to leave the EU. Of course many folks aren’t that black and white and most pro-EU folks like me have some bones to pick with the EU and its regulations (don’t get me started on the EU Cookie Law).

So then why do I care about what happened in the UK? Well, because I’m utterly appalled by the dialogue before and after the referendum. It was more about emotions and perceptions and not a good faith dialogue about what it means to be part of the EU and if the UK should leave. END_OF_DOCUMENT_TOKEN_TO_BE_REPLACED

It’s not often that I’ll go the “I told you so route”, but this time it seems appropriate towards Richard Tol. Though maybe also a thank you might be in order with how decisive scientists rebutted Tol’s nonsensus. But before I go into that, a bit of context is needed.

How to hide most of China’s coal consumption

Last week a co-worker pointed me towards the Twitter account of Dutch research journalist Marcel Crok. His concern was mostly with some recent factually incorrect tweets on this account. But as I started to browse through his time-line another tweet grabbed my attention. The tweet has since been running through my mind. Not because it is a particularly good tweet, or that it makes a good point. It’s not even a funny tweet either. In fact, I find this tweet so fascinating because there is a lot wrong with it.

Continue reading How to hide most of China’s coal consumption

The release of documents that showed Willie Soon receiving funding from vested interests has created quite a lot of chatter on the internet and in the media. The initial article in the New York Times Deeper Ties to Corporate Cash for Doubtful Climate Researcher that broke this story is in my opinion quite good.

I manage Real Skeptic and create science videos. Producing content is time-consuming and can be very costly. Equipment, software, travel, and even personnel costs add up really quickly.

Your monthly support means I can create more and higher quality content. Plus you get rewards if you support me.

Got a news tip or article idea for Real Skeptic?

Write an article and join a growing community of Skeptics and Science Communicators from all over the world.